OLYMPIC GAMES: LOOKING BACK THE HISTORY IN A STORY

A few months from now, the world centre stage is all set for the mega-sports event, and it is once again going to be “ Tokyo” – The Japanese capital. The sports lover across the globe would be glued to their favourite sports channel, cheering their team participating the Olympic games and the Lucky ones will be in the Japanese capital to experience the lifetime event, that comes in every four years.

Going down in the memory lane, the 125 years of the rich tradition of the Olympic games has its roots in our history books.   The games of Olympiad were the regular features  ( between the 8th century BC to the 4th century AD, and held at regular intervals)  in ancient Greece in the city of Athens.

INSPIRATION FOR THE MODERN OLYMPIC GAMES

Inspired by the ancient games of Greece, Baron Pierre de Coubertin founded the International Olympic Committee (IOC) in 1894, marking the beginning of the modern Olympic movement and the world witnessed the first modern Olympic Games in Athens in the year 1896.

1896 – Athens Games was the first Summer  Games and popularly known as Games of the Olympiad. It was the first international multi-sport event of its kind. Since then  IOC organizes the games once in every 4 years, decides on the host city and oversees the preparation for the games.

In each sport event, gold medals are presented to the winners of the first place, silver medals awarded for the first runner up and bronze medals are awarded to the second runner up.

IOC –  Carrying the torch of the Olympic movement since 1894.

The IOC, the governing body of the  Movement and has a defined Olympic Charter stating its structure and authority. The goal of the Olympic is to contribute to building a peaceful and better world by educating youth through the practice of sports without discrimination of any kind in the spirit of Olympic, which requires mutual understanding with a spirit of friendship, solidarity and fair play. 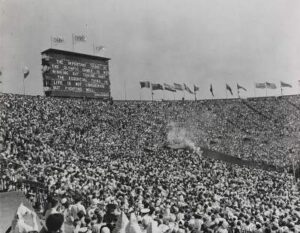 The spirit of the Olympic movement is still going strong after a century and a quarter later, and we always look forward to the mega sports event. The vision of Baron Pierre de Coubertin to bringing the world together has stood the test of time, and the ever-growing popularity has expanded the scope of the mega sports event. 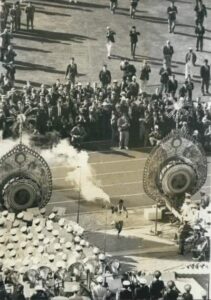 Olympics have always been an attraction to sports lovers across the globe. Everyone keenly waits for the date calendar, being announced by the IOC at the end of each mega games.  The spirit of the century-old Olympic Games had touched the hearts of the last 3 generations and a matter of nostalgia. Mutual understanding, respect and world peace are something which the world requires today, and the Olympic movement has been playing its role to achieve its endeavour through the sports. 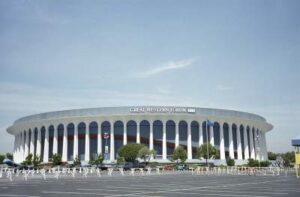 Except for the ardent sports lover who follows the Olympic meticulously, the regular online audience may not be well acquainted with the history of the games. This blog post intends to inform the audience, 125 years of Games history in the form of a simple story with relevant visuals. The chronology calendar, hosting city, the Olympic poster and compelling Games visuals ( from the black & white days) .. all together will make the reading more enjoyable.

OLYMPISM IS A PHILOSOPHY OF LIFE, EXALTING AND COMBINING IN A BALANCED WHOLE THE QUALITIES OF BODY, WILL AND MIND. BLENDING SPORT WITH CULTURE AND EDUCATION, OLYMPISM SEEKS TO CREATE A WAY OF LIFE-BASED ON THE JOY FOUND IN EFFORT, THE EDUCATIONAL VALUE OF GOOD EXAMPLE AND RESPECT FOR UNIVERSAL FUNDAMENTAL ETHICAL PRINCIPLES.

Tokyo – the capital city of Japan, will be hosting the Summer Olympic Games for the second time between 24 July to 9 August 2020. The 29th  Summer Games in the new millennium will have the creativity and innovation resting on the three basic fundamentals to initiate the transformation in the world. They are as follows.

# Accepting one another ( unity in diversity)

# Passing on a legacy for the future generation.

Aligning with these revolutionary thoughts and reforms (advocated in 2020 Olympic Agenda), the Tokyo Games will use the existing games and sports infrastructure especially the ones built during the Games in 1964, ( like the prestigious Nippon Budokkan for judo, the Baji Koen Park for equestrian events, and the Yoyogi National Gymnasium for handball event).

The Tokyo National Stadium will have a completely new look and renovated to host the Opening and Closing Ceremonies of the games. It will also be the venue for all athletics competitions. Other competition venues will be held into two areas, the “Heritage” and the “Tokyo Bay” zones.

The “Heritage” zone has some of the old venues used during the 1964 Summer Games. The “Tokyo Bay” zone will showcase events like canoe slalom, tennis and BMX.

Japan – the land of the rising sun,  has also been the land of Olympic in Asia. The country hosted the first Summer Olympic in 1964 and Winter Games in 1972 and 1998. Tokyo 2020 Summer Games will be the 4th games in the country.

The Tokyo2020  Games will have 339 gold medals for the champions in each category. 2020 Games will have the participation of more than 11,000 athletes from 206 nations. The Tokyo Games will add five more sports than the last Rio Games, taking the total number of competition events to 33.

Four new sports added to draw the younger audience and they are surfing, skateboarding, sport climbing and karate. After the Beijing 2008 Games, baseball and softball are due to return in Tokey 2020. And finally, the spirit of Japanese innovation and creativity will give it an elegant finishing touch, throughout the mega event.

The Olympic Flame –  A major attraction of the Game.

All images have been picked up from free images site ( like pixabay and Wiki commons). Due attributions have been presented wherever it is relevant. Images have been added only to make the reading more exciting. The publisher does not claim any ownership of any of these images at all.

You may read the other blog post on a range of subjects.

7 thoughts on “OLYMPIC GAMES: LOOKING BACK THE HISTORY IN A STORY”